Bootstrapping to Ramen Profitability in a Year 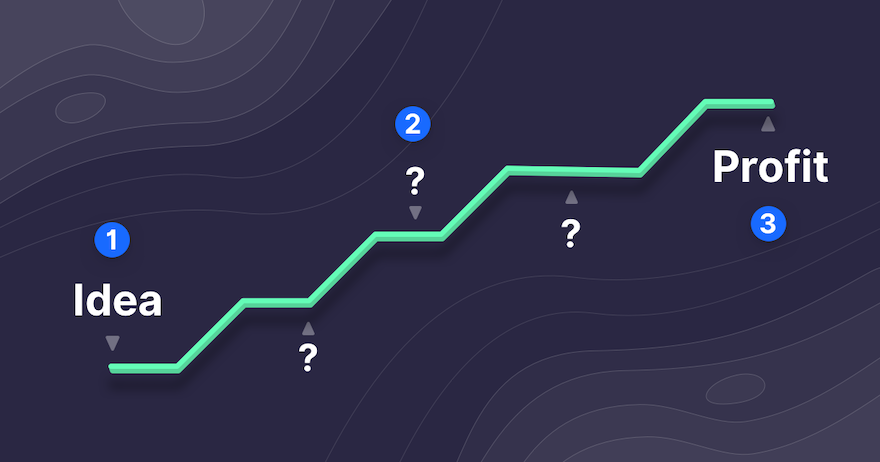 One year ago I launched Landen on ProductHunt. Since then it has slowly become profitable enough to cover my living expenses. I'm sharing the relatively unspectacular story to provide you a glimpse behind the scenes and to hopefully inspire other entrepreneurs.

I've worked as a freelancer building websites for a few years before starting to specialize on data-heavy business tools. I've worked with some medium sized companies and made a decent living, but I soon realized that instead of working for clients, I could build something for myself. At the beginning, building a profitable company on my own still seemed pretty far-fetched, but then I discovered the IndieHackers community. I was inspired by all the success stories, and seeing other people who were just starting out and sharing their experiences. Not long after, I was convinced that I could do it too.

The big question: What do I build?

There were a few ideas at the start: a habit tracker, a load testing tool, a website editor, a web-design course and bunch more. Most of those ideas came from my own unhappiness with existing solutions. Ultimately, I decided to start a website editor for the following reasons:

The third and last reason was the most important one: I want to be able to live from it. Are website builders my passion? Not really. Will this change the world, make a dent in the universe? Probably not. This is my first attempt at starting a product business, so I viewed it more as an opportunity to figure things out.

Website editors are definitely something that has been done before, with many huge established players. The great thing about creating a product in such a market is that your idea is basically already validated: people want websites and are willing to pay for them.

Now, the only question is, how can I differentiate Landen from the many potential competitors? To be honest, I probably didn't put as much thought into that as I should have. My main idea was to focus on two things: make it easier to use than any of the alternatives, and produce higher quality outcomes (more beautiful websites that load faster).

Now, the thing is, my potential competitors have millions of dollars, hundreds of employees and much more experience. How could I possibly create something better? I decided to not focus too much on what the competition was doing. I had my own vision in my head and it seemed different enough from all other solutions.

Since I didn't do much research beforehand, I needed to minimize potential losses in case of failure. Launching early is one of the most repeated pieces of advice in the bootstrapper community, so I decided to set myself a 100 day deadline. I was also able to keep my expenses extremenly low by building and designing everything myself and keeping the infrastructure simple.

With that "plan" I went ahead and started programming and designing. At this time I still had the full-time job, so I was very limited with what I could build. Even though I worked nights and weekends, it wasn't an overly stressful time. I was previously working the same hours, only then it was unpaid overtime at my job. Putting that time into my own project instead was a lot more satisfying.

To save time, there were no fancy features, I used the simplest hosting setup I could think of, and focused 90% on the core builder concept. I only used tools, languages and frameworks I was already familiar with: React, Go, and AWS. You can read more about the tech behind Landen here if you're interested.

Another thing that saved me a lot of time was not setting up a subscription system. Even though Stripe makes it realitvely easy, it's still a lot of work. Instead Landen offered a free tier and a premium tier via a one-time payment which would give customers access for one year.

During the development I also posted some questions on IndieHackers and started sharing prototypes where I received lots of valuable feedback. As it turned out, many of my fellow entrepreneurs were also potential customers, which helped me get some early test users who were genuinely interested in the product.

Looking back I'm not sure how I got the prototype done in 100 days, but somehow I did, and on May 29th, 2018 Landen launched on ProductHunt. I hunted Landen myself, put up a short video and some screenshots. There was an email list I started with about 40 people in it whom I emailed at the day of launch. That's it.

It made #3 product of the day. It was a pretty stressful, but on the evening of that day, I got my first paying customer - a huge milestone! Landen had about 250 signups that day and the next (most of them on the free tier).

A while after the launch, I realized the pricing was not right. Like many first time founders, I priced Landen way too low, at $49/year with a generous free tier. There's nothing wrong with that price itself but it didn't fit the vision I had for Landen.

As I received more feedback and did more research, it looked like the ideal pricing model would be a monthly recurring subscription. I didn't bring back yearly plans until much later (another mistake). Yearly plans are a great way to raise money early on. By now, the pricing has been overhauled three times, getting more expensive (almost) every time.

Other than the pricing model, the product seemed to be on the right track. Overwhelmingly positive feedback motivated me to keep working on Landen, and I continued developing things from my own wish list and customer requests. I also wasted a lot of time.

There were things I knew wouldn't be important to the projects success, but they seemed fun to do. So I did them anyway and developed a basic analytics feature, integrated email lists, and kept polishing the UI.

Landen might have grown faster if I had kept my focus, but I still do the same thing today. Sounds like an easily avoidable waste of time, but I don't think it is. Starting a company is stressful, and doing those fun little detours has helped me deal with the stress and prevent me from burning out.

I was only able to work as much as I did because I enjoyed what I did. There are always some aspects which are less enjoyable, but in order to do this long term, the bulk of the work needs to be something I like doing.

When I was done with the fun side-side-projects it was time to focus on the core roadmap again. I tried to find the right place for Landen in the website-builder market. With so many different use cases, industries, and a big range of potential customers from solo entrepreneurs to mid-size businesses, it was hard to say exactly who Landen is for.

I had set out to make a new website builder but there are lots of different kinds of websites. What should Landen do and for whom? At the beginning I just thought: the more the better. I wanted to expand it and make versions that would work for restaurants, hotels, service businesses and almost everyone else who wanted a website. For at least half a year I didn't realize what a big mistake that was, and kept expanding that list: 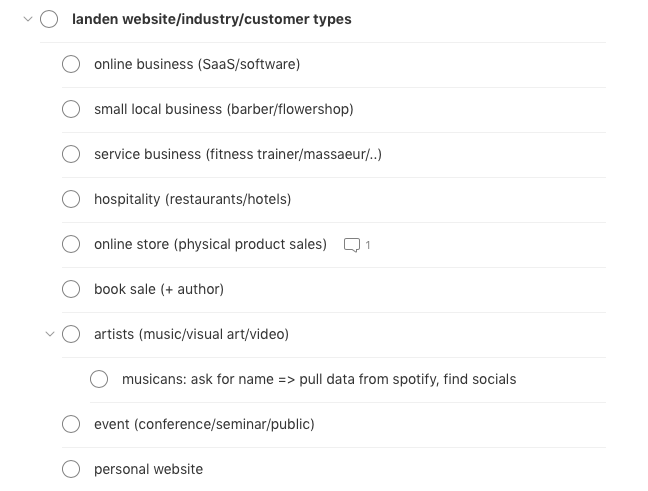 Then one day I was talking to my girlfriend about how starting a company poses so many questions I don't have the answers to. I was trying to articulate what I wanted it to be and said something like "I just want to make it easy for startups to make websites". That's basically how I made design decisions for Landen from the start but I never really realized that.

From then on I decided to scrap any plan to expand into other industries (even though its still tempting) and focus entirely on building something to help startups make websites. This hasn't just made it easier to plan the product development but also to market Landen. The limitation alienates a lot of potential customers, but for startups it becomes a lot more attractive.

Making realizations like that is one of the most exciting things about running your business. You get to figure things out as you go, your product becomes more defined and your vision gets clearer. Some people might have this figured out from the start but I don't think you have to.

About 5 months after the launch, Landen made $1,000 MRR, and I decided to go full-time.

Wait.. what? Only $1k MRR after five months? And going full-time?! Waiting for a higher MRR and keeping the day job would've definitely been the safer bet, but my client work was starting to make me miserable. Landen gave me the freedom to live out my creativity and work on something new instead of realizing someone else's vision.

I'm lucky I started out with no dept (yay European universities), no dependents, and a safety net of friends and family. My freelancing work allowed me to save up enough money. In short, the stakes were fairly low, so I took the "risk".

It might still be too early to tell, but I think it was the right decision. Even if I had waited longer, it would've just been a matter of time before I made that transition. Making the jump sooner, freed up my mind from many "what if's".

After going full-time I kept doing more of what I was already doing: developing features and improvements. However, it also dawned on me that I'd have to start marketing soon, but I wasn't really happy with the product yet. Not having done much marketing led to pretty slow but stead growth. Most new customers came from word of mouth or from the ProductHunt launch.

It took me another half a year to feel like Landen was ready for to be shared with the world, but I had no idea how. I planned another ProductHunt launch with all the new features, and tried out paid acquisition (which spectacularly failed).

To this day, I am mostly clueless about marketing and grateful for all the amazing customers, reviewers and enthusiasts who keep telling their friends, colleagues and communities about Landen.

A few weeks ago, almost one year after starting work on Landen, it has finally reached "Ramen Profitability", meaning it can sustain my minimum living expenses. It's been a great journey, even though it's been relatively calm. There's so much hype out there about overnight successes, startups making millions and "the next big thing" that I just wanted to share a more modest story.

Reaching that milestone gives me faith for the future of the company, even though that doesn't mean Landen will ultimately be successful by many standards. My definition of success in this case is to match my previous income with a healthy and happy customer base.

I will continue working on Landen full-time and try to learn as much as possible along the way. A detailed post about the future vision for Landen will follow soon.

Thanks for reading! If you have any comments, please share them over at the IndieHackers thread.